Here is a minor indicator that I follow, from ATA: ATA Truck Tonnage Index Jumped 2.7% in November


The American Trucking Associations’ advanced seasonally adjusted For-Hire Truck Tonnage Index increased 2.7% in November, after falling 1.9% in October. ... In November, the index equaled 128.5 (2000=100) versus 125.1 in October. November’s level is a record high. Compared with November 2012, the SA index surged 8.1% ...
...
“Tonnage snapped back in November, which fits with several other economic indicators,” said ATA Chief Economist Bob Costello. “Assuming that December isn’t weak, tonnage growth this year will be more than twice the gain in 2012.”

Tonnage increased 2.3% in 2012. Costello noted tonnage accelerated in the second half of the year, indicating that the economy is likely stronger some might believe.
emphasis added 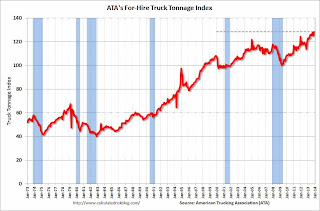 The index is up solidly year-over-year. The monthly decline in October was probably related to the government shutdown, but the index bounced back in November to a record high.
Posted by Calculated Risk on 12/21/2013 04:44:00 PM
Newer Post Older Post Home