The Realtor (NAR) data is monthly and released with a lag (the most recent data was for October).  However Ben at Housing Tracker (Department of Numbers) has provided me some weekly inventory data for the last several years. 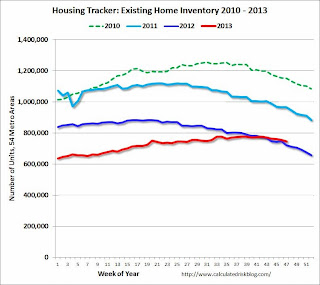 In 2011 and 2012, inventory only increased slightly early in the year and then declined significantly through the end of each year.

We can be pretty confident that inventory bottomed early this year, and I expect the seasonal decline to be less than usual at the end of the year - so the year-over-year change will continue to increase.

Inventory is still very low, but this increase in inventory should slow house price increases.  One of the key questions for 2014 will be: How much will inventory increase?  I'll post some thoughts on inventory at the end of the year.