Schedule for Week of December 1st

This will be a very busy week for economic data with several key reports including the November employment report on Friday, New Home sales for September and October on Wednesday, and the 2nd estimate of Q3 GDP on Thursday.

Other key reports include the ISM manufacturing index on Monday, November vehicle sales on Tuesday, the ISM service index on Wednesday, and the October trade deficit report on Wednesday.

9:00 AM ET: The Markit US PMI Manufacturing Index for November.  The consensus is for an increase to 54.2 from 51.8 in October. 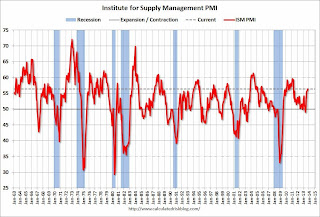 The ISM manufacturing index indicated expansion in October at 56.4%. The employment index was at 53.2%, and the new orders index was at 60.6%. 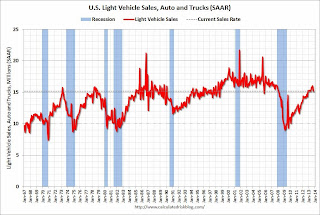 This graph shows light vehicle sales since the BEA started keeping data in 1967. The dashed line is the October sales rate.

8:15 AM: The ADP Employment Report for November. This report is for private payrolls only (no government). The consensus is for 185,000 payroll jobs added in November, up from 130,000 in October. 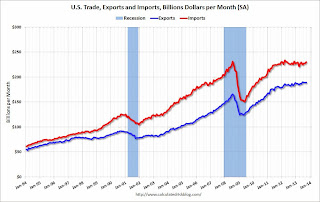 8:30 AM: Trade Balance report for October from the Census Bureau.

The consensus is for the U.S. trade deficit to decrease to $40.2 billion in October from $41.8 billion in September. 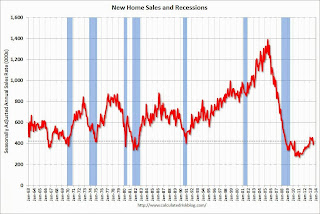 10:00 AM: New Home Sales for September and October from the Census Bureau.

This graph shows New Home Sales since 1963. The dashed line is the August sales rate.

The consensus is for an increase in sales to 425 thousand Seasonally Adjusted Annual Rate (SAAR) in October from 421 thousand in August.

10:00 AM: ISM non-Manufacturing Index for November. The consensus is for a reading of 55.5, up from 55.4 in October. Note: Above 50 indicates expansion, below 50 contraction.

10:00 AM: Trulia Price Rent Monitors for November. This is the index from Trulia that uses asking house prices adjusted both for the mix of homes listed for sale and for seasonal factors.

8:30 AM: The initial weekly unemployment claims report will be released. The consensus is for claims to increase to 322 thousand from 316 thousand last week.

10:00 AM: Manufacturers' Shipments, Inventories and Orders (Factory Orders) for October. The consensus is for a 1.2% decrease in October orders.

The consensus is for the unemployment rate to decrease to 7.2% in November from 7.3% in October.  A key will be if the participation rate increases too, reversing the sharp decline last month.

The following graph shows the percentage of payroll jobs lost during post WWII recessions through October. 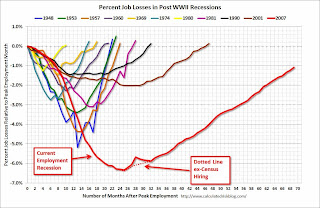 The economy has added 7.8 million private sector jobs since employment bottomed in February 2010 (7.2 million total jobs added including all the public sector layoffs).

There are still almost 1.0 million fewer private sector jobs now than when the recession started in 2007.

9:55 AM: Reuter's/University of Michigan's Consumer sentiment index (preliminary for December). The consensus is for a reading of 75.5, up from 75.1 in November.