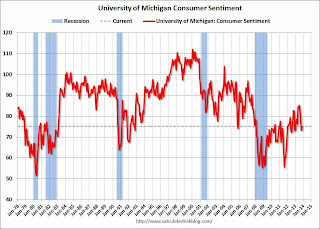 This was above the consensus forecast of 73.3. Sentiment has generally been improving following the recession - with plenty of ups and downs - and one big spike down when Congress threatened to "not pay the bills" in 2011.

Unfortunately Congress shut down the government in October, and once again threatened to "not pay the bills", and this impacted sentiment last month.  The spike down wasn't as large this time, probably because many people realized the House was bluffing with a losing hand.  And now sentiment is starting to recover.

Chicago PMI: From the Chicago ISM:


The November Chicago Business Barometer softened to 63.0 after October’s sharp rise to a 31-month high of 65.9. November’s slight correction came amid mild declines in New Orders, Production and Order Backlogs after double digit gains in the prior month.

Despite November’s weakening, the Barometer remained well above 60 for the second month, pushing the three month moving average to the highest level since November 2011 [note: above 50 is expansion]

Employment was up for the second consecutive month, reaching the highest level since October 2011, and the first time above 60 since February 2012.

Commenting on the MNI Chicago Report, Philip Uglow, Chief Economist at MNI Indicators said, “The Barometer might be down in November, but this was another impressive month with companies reporting firm growth”.

“Having kept inventories lean for so long, a pick-up in demand has led to a sharp rise in stock building among the companies in our panel. And to handle the latest production and new orders boost, companies are hiring at the fastest pace for two years,” he added.