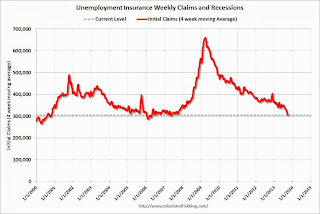 
The dashed line on the graph is the current 4-week average. The four-week average of weekly unemployment claims decreased to 305,000.

The 4-week average is at the lowest level since May 2007 (before the recession started).  Claims were below the 313,000 consensus forecast. 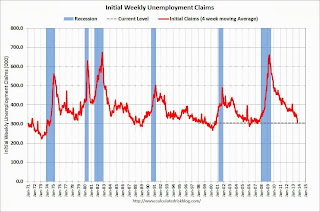 Here is a long term graph of the 4-week average of weekly unemployment claims back to 1971.

The current level of weekly claims is consistent with a solidly growing economy.

Note: This information is collected by the states and will continue to be released.
Posted by Calculated Risk on 10/03/2013 08:37:00 AM
Newer Post Older Post Home