Workers aren't quitting their jobs to pursue better opportunities. Companies aren't filling positions when they do open up.

Economists refer to job turnover that doesn't change the overall number of employees at a company as "churn." In normal times, churn dwarfs job creation and destruction, as millions of workers resign or are fired and are replaced. By a wide array of measures, however, rates of churn remain far below normal. In 2007, nearly three million workers quit their jobs each month. In July, just 2.3 million did, a figure that has improved only modestly since the recession ended.

Churn doesn't get as much attention as new-job creation, but to people looking for work, it's just as important.
...
Policy makers are taking notice. Federal Reserve Vice Chairwoman Janet Yellen ... last year highlighted the low rate of so-called voluntary quits as an important sign that the economy isn't improving as rapidly as the falling unemployment rate might suggest.

This data is found in the monthly Job Openings and Labor Turnover Survey (JOLTS). Here is a graph from last month's survey: 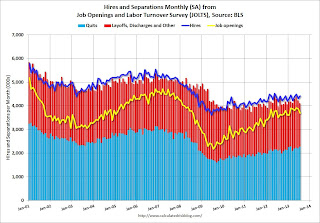 Total turnover (churn) is the light blue and red combined.  This is still low.

Quits are in light blue and have been trending up, but still low.  These are voluntary separations and more quits usually indicate a better labor market.

NOTE: The JOLTS for August is scheduled to be released on Tuesday, but will probably be delayed by the government shutdown.

Monday:
• Early: The LPS August Mortgage Monitor report. This is a monthly report of mortgage delinquencies and other mortgage data.

• At 3:00 PM ET, the Consumer Credit report for August from the Federal Reserve. The consensus is for credit to increase $12.8 billion in August.

Below is a graph from Gasbuddy.com for nationwide gasoline prices. Nationally prices are below $3.40 per gallon.  If you click on "show crude oil prices", the graph displays oil prices for WTI, not Brent; gasoline prices in most of the U.S. are impacted more by Brent prices.