On a monthly basis, retail sales declined 0.1% from August to September (seasonally adjusted), and sales were up 3.2% from September 2012. From the Census Bureau report:


The U.S. Census Bureau announced today that advance estimates of U.S. retail and food services sales for September, adjusted for seasonal variation and holiday and trading-day differences, but not for price changes, were $425.9 billion, a decrease of 0.1 percent from the previous month, but 3.2 percent above September 2012. ... The July to August 2013 percent change was unrevised from +0.2 percent. 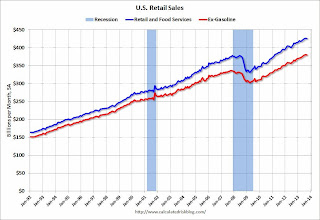 Retail sales are up 28.5% from the bottom, and now 12.6% above the pre-recession peak (not inflation adjusted)

Excluding gasoline, retail sales are up 25.6% from the bottom, and now 13.1% above the pre-recession peak (not inflation adjusted). 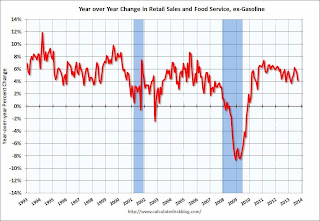 This was slightly below the consensus forecast of no change for retail sales, however sales ex-autos were at forecast.
Posted by Calculated Risk on 10/29/2013 08:30:00 AM
Newer Post Older Post Home