From HotelNewsNow.com: STR: US results for week ending 5 October

The relatively flat performances across the board can be attributed to the partial shutdown of the U.S. government on 1 October, said Brad Garner, senior VP for STR. ...

“Several variables factor into the performance for the week, and overall there were challenges for a number of markets,” Garner said. “Long-term effects of the shutdown remain to be seen, but in the early going it clearly had an impact on the overall hotel industry.”
emphasis added 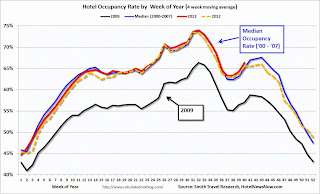 This has been a decent year for the hotel industry before the shutdown.  Now the occupancy rate is down year-over-year, and this decline will also show up in airlines, rental cars, restaurants and more.  Just as the hotel industry is almost back on solid footing, Congress pulls the football away again.