[Strip Malls] National vacancies remained unchanged in the third quarter for neighborhood and community centers. ... Vacancies for neighborhood and community centers now stand at 10.5%, down 30 basis points year over year, and just a paltry 60 basis points below the peak vacancy rate of 11.1% which was recorded two years ago, during the third quarter of 2011. By any measure this is a weak recovery; only 2.351 million SF of space was absorbed this period, the slowest rate of increase in occupied stock this year. And all this despite the fact that 1.472 million SF of new space came online, the largest number for quarterly additions from new construction in 2013.
...
[Regional] Malls have generally experienced a stronger recovery relative to their smaller brethren shopping centers; national vacancies peaked at 9.4% in the third quarter of 2011, and have descended at a faster pace than neighborhood and community center vacancies. Third quarter mall vacancies stand at 8.2%, down 10 basis points from the second quarter and down 50 basis points year over year. Asking rents grew by 0.4% in the third quarter and 1.4% from twelve months prior. This is the tenth consecutive quarter of rent increases at the national level for regional malls. 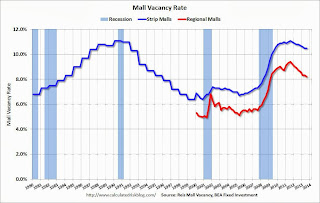