Asking and effective rents both grew by 0.3% during the third quarter. This marks the third consecutive quarter in a row with slowing asking and effective rent growth. Though in reality, rental growth rates are so low that the quarter‐to‐quarter differences are rather minor and could simply be idiosyncratic. Nonetheless, asking and effective rents have now risen for twelve consecutive quarters. Yet, the simple truth is that with vacancy remaining elevated at 16.9%, it is far too high to be conducive to much rent growth. At that level of vacancy, landlords have little leverage to either increase face level asking rents or to remove concessions from leases. A meaningful acceleration in rent growth will not be possible until vacancy falls to pre‐recessionary levels. 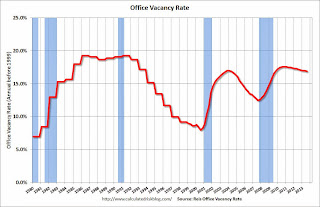 With the high vacancy rate, growth in construction activity for offices will be sluggish.