Note: We will probably see some impact on travel over the next week or two from the government shutdown. The data below is before the shutdown.

From HotelNewsNow.com: STR: US results for week ending 28 September 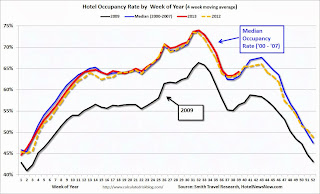 Overall - before the shutdown - this has been a decent year for the hotel industry.