From the MBA: Mortgage Delinquencies, Foreclosures Continue to Drop


The delinquency rate for mortgage loans on one-to-four-unit residential properties decreased to a seasonally adjusted rate of 6.96 percent of all loans outstanding at the end of the second quarter of 2013, the lowest level since mid-2008. The delinquency rate dropped 29 basis points from the previous quarter, and 62 basis points from one year ago, according to the Mortgage Bankers Association’s (MBA) National Delinquency Survey.

The delinquency rate includes loans that are at least one payment past due but does not include loans in the process of foreclosure. The percentage of loans on which foreclosure actions were started during the second quarter decreased to 0.64 percent from 0.70 percent, a decrease of six basis points and reached the lowest level since the first quarter of 2007 and less than half of the all-time high of 1.42 percent reached in September 2009. The percentage of loans in the foreclosure process at the end of the second quarter was 3.33 percent down 22 basis points from the first quarter and 94 basis points lower than one year ago.

The serious delinquency rate, the percentage of loans that are 90 days or more past due or in the process of foreclosure, was 5.88 percent, a decrease of 51 basis points from last quarter, and a decrease of 143 basis points from the second quarter of last year. However, as with last quarter’s results, the improvement in the seriously delinquent percentages may be slightly less than stated because at least one large specialty servicer that has received a number of loan transfers does not participate in the MBA survey.

“For most of the country, delinquencies and foreclosures have returned to more normal historical levels. Most states are at or only slightly above longer-term averages, and some of the worst-hit states are showing improvement. For example while 10 percent of the mortgages in Florida are somewhere in the process of foreclosure, this is down considerably from the high of 14.5 percent two years ago. While Florida leads the country in the rate of foreclosures started, that rate of 1.1 percent is the lowest since mid-2007 and half of what it was three years ago,” said Jay Brinkmann, MBA’s Chief Economist and SVP of Research and Economics.

Some of the highest numbers are in New York, New Jersey and Connecticut. The rate of new foreclosures in New York hit an all-time high during the second quarter and is now essentially equal with Florida. The percentage of loans in foreclosure in New Jersey remains about the same as the rates in California, Arizona and Nevada combined. The foreclosure percentages in Connecticut are back to near all-time highs for that state. 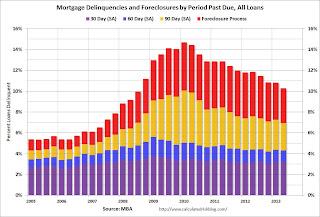