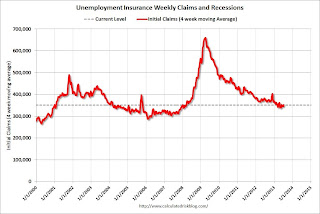 
The dashed line on the graph is the current 4-week average. The four-week average of weekly unemployment claims increased to 351,750.

The 4-week average has mostly moved sideways over the last few months.  Claims were above the 337,000 consensus forecast, but I wouldn't read too much into this one report since this was a holiday week and data in July can be impacted by the timing of auto plant shutdowns.
Posted by Calculated Risk on 7/11/2013 08:35:00 AM
Newer Post Older Post Home