This was released this morning from RealtyTrac: U.S. Foreclosure Activity Decreases 14 Percent in June to Lowest Level Since December 2006 Despite 34 Percent Jump in Judicial Scheduled Foreclosure Auctions


RealtyTrac® ... today released its Midyear 2013 U.S. Foreclosure Market Report™, which shows a total of 801,359 U.S. properties with foreclosure filings — default notices, scheduled auctions and bank repossessions — in the first half of 2013, a 19 percent decrease from the previous six months and down 23 percent from the first half of 2012.
...
A total of 127,790 U.S. properties had foreclosure filings in June, down 14 percent from the previous month and down 35 percent from a year ago to the lowest monthly level since December 2006 — a six and a half year low. 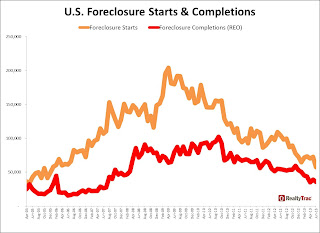 This graph from RealtyTrac shows foreclosure starts and completions since 2005.

Some of the decline in foreclosure activity is related to the increased emphasis on short sales and modifications.

The difference in various states is another reminder that a national foreclosure law, with strong borrower protections, should be part of the housing finance reform legislation.
Posted by Calculated Risk on 7/11/2013 01:51:00 PM
Newer Post Older Post Home