Schedule for Week of June 16th

The key event this week will be the FOMC statement and press conference on Wednesday.  No changes in policy are expected, but Fed Chairman Ben Bernanke is expected to reiterate that rates will stay low for a long long time.

There are three key housing reports that will be released this week, housing starts on Tuesday, homebuilder confidence survey on Monday, and existing home sales on Thursday.

10:00 AM ET: The June NAHB homebuilder survey. The consensus is for a reading of 45, up from 44 in May.   This index increased sharply last year, but has moved sideways recently with some builders complaining about higher costs and lack of buildable land.  Any number below 50 still indicates that more builders view sales conditions as poor than good. 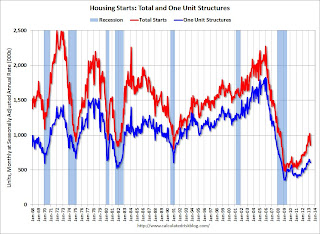 The consensus is for total housing starts to increase to 950 thousand (SAAR) in May.

During the day: The AIA's Architecture Billings Index for May (a leading indicator for commercial real estate).

2:00 PM: FOMC Meeting Announcement.  No change to interest rates or QE purchases is expected at this meeting.

2:00 PM: FOMC Forecasts This will include the Federal Open Market Committee (FOMC) participants' projections of the appropriate target federal funds rate along with the quarterly economic projections.

8:30 AM: The initial weekly unemployment claims report will be released. The consensus is for an increase to 340 thousand from 334 thousand last week. 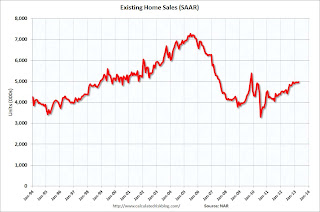 10:00 AM: Existing Home Sales for April from the National Association of Realtors (NAR).

The consensus is for sales of 5.00 million on seasonally adjusted annual rate (SAAR) basis. Sales in April were at a 4.97 million SAAR.   Economist Tom Lawler is estimating the NAR will report a May sales rate of 5.2 million.

A key will be inventory and months-of-supply.

10:00 AM: the Philly Fed manufacturing survey for June. The consensus is for a reading of -0.5, up from -5.2 last month (above zero indicates expansion).