Lawler: Single Family Homes Built/Sold in 2012: “Back to Bigger,” But on Very Low Volumes

Census released its estimates for the characteristics of single-family homes completed and sold in 2012.

CR Note: from the release:

From Lawler: Here is a chart showing the % of SF homes completed with square feet of floor area of 3,000 or more. 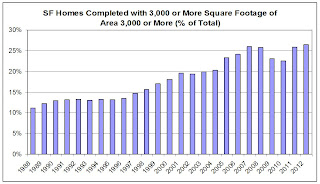 There has been a long-term upward trend in the average and median square footage of SF homes built in the US, though “size” has had a bit of a cyclical component as well – generally rising more rapidly during strong markets, and more slowly during “soft” markets. The “dip” in 2009-10 may also have reflected a temporary increase in building targeted at first-time home buyers related to the home buyer tax credits, while the recent rebound reflects the post-tax-credit weakness in first-time home buyer demand.

Of course, the recent increase in the share of “large” SF homes built has been on very low overall volumes. 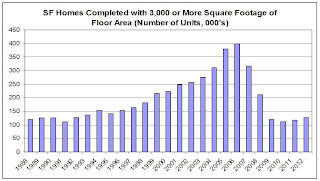 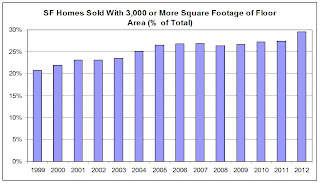 Here is a chart showing the % of new SF homes sold that had four or more bedrooms, with data going back to 1978. 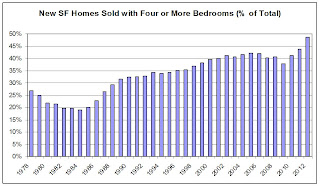 And here is a chart showing the number of new SF homes sold with four or more bedrooms. 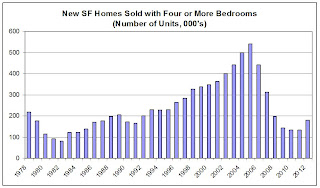