Schedule for Week of May 5th

This will be a very light week for economic data.

The Fed's April Senior Loan Officer Survey will be released on Monday, and Fed Chairman Ben Bernanke speaks on Friday.

Early: The LPS March Mortgage Monitor report. This is a monthly report of mortgage delinquencies and other mortgage data.

2:00 PM ET: The April 2013 Senior Loan Officer Opinion Survey on Bank Lending Practices from the Federal Reserve.  This might show some slight loosening in lending standards.

10:00 AM: Trulia Price Rent Monitors for April. This is the index from Trulia that uses asking house prices adjusted both for the mix of homes listed for sale and for seasonal factors. 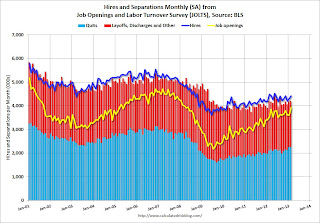 10:00 AM: Job Openings and Labor Turnover Survey for March from the BLS.

Jobs openings increased in February to 3.925 million, up from 3.611 million in January. The number of job openings (yellow) has generally been trending up, and openings were up 11% year-over-year compared to February 2012.  This was most job openings since May 2008.

Quits were up 7% year-over-year and at the highest level since 2008. These are voluntary separations. (see light blue columns at bottom of graph for trend for "quits").

3:00 PM: Consumer Credit for March from the Federal Reserve. The consensus is for credit to increase $15.0 billion in March.

8:30 AM: The initial weekly unemployment claims report will be released. The consensus is for claims to increase to 335 thousand from 324 thousand last week.

10:00 AM: Monthly Wholesale Trade: Sales and Inventories for March. The consensus is for a 0.4% increase in inventories.