Last week I summarized some recent research on the labor force participation rate. The following piece from Michelle Meyer at Merrill Lynch argues the LFPR will likely move sideways over the next few years. Changes in the participation rate have important implications for the number of jobs needed to lower the unemployment rate.

An excerpt from Michelle Meyer's piece:


The future trajectory of the labor force participation rate (LFPR) is very important in gauging the trend in the unemployment rate and risks to wage inflation. In order to forecast the labor force participation rate, we must understand the drivers behind its recent sharp movements – to what extent is a long-term trend related to demographics (aging population) versus secular or cyclical dynamics?

We can isolate the effect of demographics on the LFPR by looking at the participation rates by age cohort. The aggregate LFPR is equal to the summation of each individual age cohort's LFPR weighted by its share of the population. ... This suggests that half of the 2.7pp decline in the LFPR since the onset of the recession can be explained simply from the aging population. In other words, holding all else equal – meaning no business cycle dynamics – the LFPR would be at 64.6% today compared to the actual rate of 63.3%. The remaining 1.4pp drop is due to some combination of secular and short-term cyclical factors.

The two primary secular trends are the decline in the LFPR among the youth population and the rise among 55+. The LFPR for 16 to 19 year olds plunged to 34.3% last year from 52% in 2000. While this may have been accelerated by the past two recessions, we believe this is a permanent trend. On the other end, the LFPR of the older population has increased, likely reflecting higher life expectancy, less confidence in social benefit programs and loss of wealth from the Great Recession.

... we still believe that there are some cyclical components. One way to gauge the cyclicality of the LFPR is to observe state-level variation in the relationship between the LFPR and the health of the economy. Based on work from a recent San Francisco Fed paper, we compare the percentage decline in state payrolls to the decline in the LFPR during the recession, both weighted by the relative size of its labor force. We find a positive relationship where larger declines in employment are associated with bigger drops in the LFPR. The paper does the same exercise for prior recessions and finds a positive relationship existed in each, with the exception of the 2000 cycle.

If the relationship holds on the downside, do we also observe it during the recovery? There is little evidence of such correlation in this recovery, but it does exist for prior cycles. In prior cycles, the positive correlation did not become apparent until the economy had exceeded the previous employment peak by a significant amount. This suggests that the cyclical pressure in the LFPR may not be observed until 2015, at the earliest.

We can simulate a future path for the LFPR based on our assessment of the drivers of the downturn in the LFPR. The first step is to account for the continued aging of the population using the Census Bureau's projections by age cohort. If we keep the LFPR by age group constant at 2007 levels and only allow for demographic adjustments, we find that the LFPR will fall by another 3.3pp by 2025 and then slip to 59.2% in 2050. ...

We also assume that the secular trends exhibited during the last decade persist, but at a slower pace, implying a modest downturn in the LFPR among the youth and an upward trajectory for the 55+ age group. ... Based on these rough assumptions, we forecast the LFPR will slip slightly this year, but with a stronger recovery under way next year, the LFPR should start to level off some and potentially increase beginning in 2015 (Chart 4). 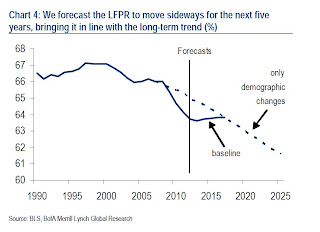 The cyclical dynamics, in our view, are not strong enough to generate a pop higher in the LFPR given the downward pull from demographics. But at a minimum, we expect these dynamics can counter the downside pressure and allow the LFPR to move sideways once the recovery builds momentum.