S&P/Case-Shiller released the monthly Home Price Indices for February ("February" is a 3 month average of December, January and February).

From S&P: Home Prices Rise in February 2013 According to the S&P/Case-Shiller Home Price Indices

“Home prices continue to show solid increases across all 20 cities,” says David M. Blitzer, Chairman of the Index Committee at S&P Dow Jones Indices. “The 10- and 20-City Composites recorded their highest annual growth rates since May 2006; seasonally adjusted monthly data show all 20 cities saw higher prices for two months in a row – the last time that happened was in early 2005.

“Phoenix, San Francisco, Las Vegas and Atlanta were the four cities with the highest year-over-year price increases. Atlanta recovered from a wave of foreclosures in 2012 while the other three were among the hardest hit in the housing collapse. At the other end of the rankings, three older cities – New York, Boston and Chicago – saw the smallest year-over-year price improvements. 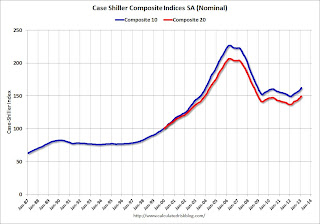 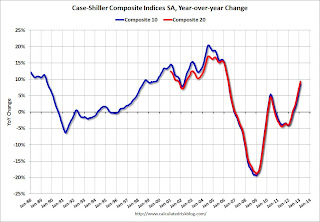