Builder Confidence declines in April due to higher costs

The National Association of Home Builders (NAHB) reported the housing market index (HMI) decreased 2 points in April to 42. Any number under 50 indicates that more builders view sales conditions as poor than good.

From the NAHB: Rising Costs Put Squeeze on Builder Confidence in April


Facing increasing costs for building materials and rising concerns about the supply of developed lots and labor, builders registered less confidence in the market for newly built, single-family homes in April, with a two-point drop to 42 on the National Association of Home Builders/Wells Fargo Housing Market Index (HMI), released today.
...
“Supply chains for building materials, developed lots and skilled workers will take some time to re-establish themselves following the recession, and in the meantime builders are feeling squeezed by higher costs and limited availability issues,” explained NAHB Chief Economist David Crowe. “That said, builders’ outlook for the next six months has improved due to the low inventory of for-sale homes, rock bottom mortgage rates and rising consumer confidence.”
...
While the HMI component gauging current sales conditions declined two points to 45 and the component gauging buyer traffic declined four points to 30 in April, the component gauging sales expectations in the next six months posted a three-point gain to 53 – its highest level since February of 2007. 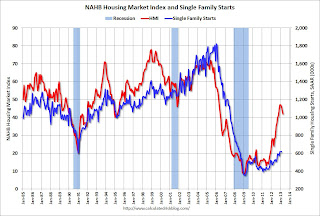 This graph compares the NAHB HMI (left scale) with single family housing starts (right scale). This includes the April release for the HMI and the February data for starts (March housing starts will be released tomorrow). This was below the consensus estimate of a reading of 45.

As I noted last week, lumber prices are near the housing bubble high, and it appears highers costs are impacting builder confidence.
Posted by Calculated Risk on 4/15/2013 10:00:00 AM
Newer Post Older Post Home