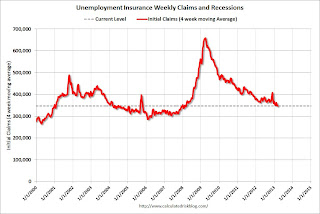 
The dashed line on the graph is the current 4-week average. The four-week average of weekly unemployment claims decreased to 346,750 - this is the lowest level since early March 2008.

Weekly claims were below the 350,000 consensus forecast.  Claims might increase over the next few months due to the "sequestration" budget cuts, but right now initial unemployment claims suggest an improving labor market.
Posted by Calculated Risk on 3/14/2013 08:35:00 AM
Newer Post Older Post Home