Catching up ... earlier from the Philly Fed: March Manufacturing Survey


Manufacturers responding to the March Business Outlook Survey reported slight increases in business activity this month. Indicators for general activity and new orders increased notably, following negative readings over the previous two months. Indicators for shipments and employment remained positive and improved slightly this month. Changes in the surveyʹs broad indicators of future activity were mixed but continued to reflect general optimism about growth over the next six months.

The employment index increased from 0.9 in February to 2.7 this month, its second consecutive positive reading.
emphasis added 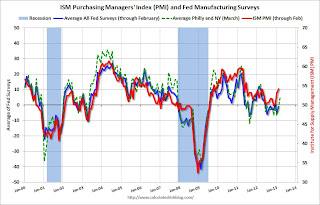 Here is a graph comparing the regional Fed surveys and the ISM manufacturing index. The dashed green line is an average of the NY Fed (Empire State) and Philly Fed surveys through March. The ISM and total Fed surveys are through February.

The average of the Empire State and Philly Fed surveys increased in March, and is back above zero.   This suggests the ISM manufacturing index will show further expansion in March.