Housing Starts and the Unemployment Rate

By request, here is an update to a graph that I've been posting for several years.  This shows single family housing starts (through February 2013) and the unemployment rate (inverted) also through February. Note: there are many other factors impacting unemployment, but housing is a key sector.

You can see both the correlation and the lag. The lag is usually about 12 to 18 months, with peak correlation at a lag of 16 months for single unit starts. The 2001 recession was a business investment led recession, and the pattern didn't hold.

Housing starts (blue) increased a little in 2009 with the homebuyer tax credit - and then declined again - but mostly starts moved sideways for two and a half years and only started increasing steadily near the end of 2011. This was one of the reasons the unemployment rate remained elevated. 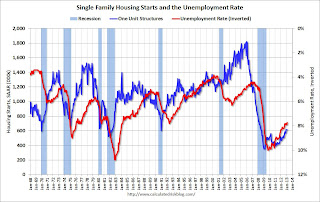 Usually near the end of a recession, residential investment (RI) picks up as the Fed lowers interest rates. This leads to job creation and also additional household formation - and that leads to even more demand for housing units - and more jobs, and more households - a virtuous cycle that usually helps the economy recover.  However this time, with the huge overhang of existing housing units, this key sector didn't participate for an extended period.

The good news is single family starts have been increasing steadily for over a year, and that should mean more construction employment this year, and that the unemployment rate should decline further in 2013.