The NAR reports: Existing-Home Sales and Prices Continue to Rise in February


Total existing-home sales, which are completed transactions that include single-family homes, townhomes, condominiums and co-ops, increased 0.8 percent to a seasonally adjusted annual rate of 4.98 million in February from an upwardly revised 4.94 million in January, and are 10.2 percent above the 4.52 million-unit level seen in February 2012.

Total housing inventory at the end of February rose 9.6 percent to 1.94 million existing homes available for sale, which represents a 4.7-month supply 2 at the current sales pace, up from 4.3 months in January, which was the lowest supply since May 2005. Listed inventory is 19.2 percent below a year ago when there was a 6.4-month supply. 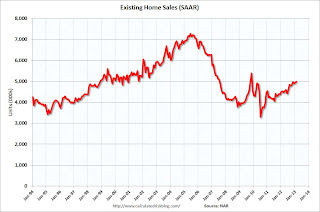 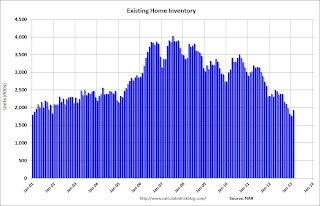 According to the NAR, inventory increased to 1.94 million in February up from 1.77 million in January.   Inventory is not seasonally adjusted, and inventor usually increases from the seasonal lows in December and January, and peaks in mid-to-late summer (so some of this increase was seasonal). 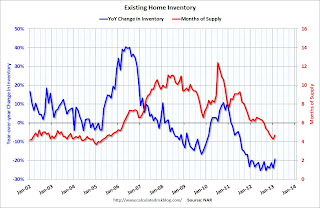 Inventory decreased 19.2% year-over-year in February from February 2012. This is the 24th consecutive month with a YoY decrease in inventory, but the smallest YoY decrease since 2011 (I expect the YoY decrease to get smaller all year).

Months of supply increased to 4.7 months in February.

This was close to expectations of sales of 5.01 million. For existing home sales, the key number is inventory - and the sharp year-over-year decline in inventory is a positive for housing. I'll have more later ...