The Chicago Fed released the national activity index (a composite index of other indicators): Economic Activity Improved in February


Led by gains in production-related indicators, the Chicago Fed National Activity Index (CFNAI) increased to +0.44 in February from –0.49 in January. All four broad categories of indicators that make up the index increased from January, and three of the four categories made positive contributions to the index in February.

The index’s three-month moving average, CFNAI-MA3, decreased to +0.09 in February from +0.28 in January, marking its fourth consecutive reading above zero. February’s CFNAI-MA3 suggests that growth in national economic activity was somewhat above its historical trend. The economic growth reflected in this level of the CFNAI-MA3 suggests limited inflationary pressure from economic activity over the coming year.
emphasis added 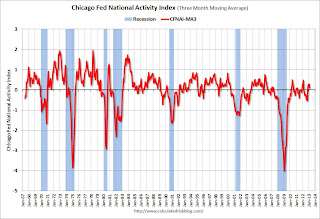 This suggests economic activity improved in February, and growth was somewhat above its historical trend (using the three-month average).


What is the National Activity Index? The index is a weighted average of 85 indicators of national economic activity drawn from four broad categories of data: 1) production and income; 2) employment, unemployment, and hours; 3) personal consumption and housing; and 4) sales, orders, and inventories.