Based on an estimate from AutoData Corp, light vehicle sales were at a 15.29 million SAAR in January. That is up 10% from January 2012, and down slightly from the sales rate last month.

This was at the consensus forecast of 15.3 million SAAR (seasonally adjusted annual rate). 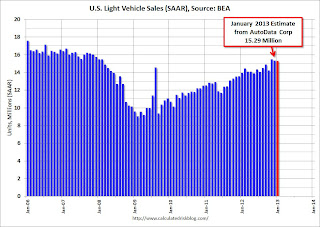 This is a solid start to the new year.    After three consecutive years of double digit auto sales growth, the growth rate will probably slow in 2013 - but this will still be another positive year for the auto industry.

Even if sales average this rate all year, sales would be up about 6% from 2012. 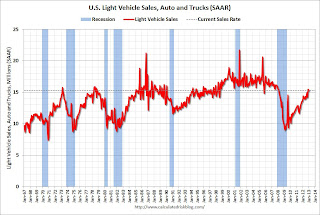 This shows the huge collapse in sales in the 2007 recession, and that sales have increased significantly from the bottom.