Earlier I posted some questions for next year: Ten Economic Questions for 2013. I'll try to add some thoughts, and maybe some predictions for each question.

Mostly I focus on the US, but like everyone I've been watching Europe a little more closely over the last few years.  Unfortunately the situation in Europe remains grim, with high unemployment - especially in Greece and Spain - and most of the eurozone in recession.

However the crisis has eased a bit. There are several reasons - one key is the the ECB's longer-term refinancing operations (LTROs) that was offered in December 2011. These have a 36 month maturity, and the LTROs have helped lower borrowing costs in Europe. 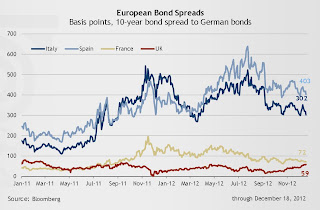 By this measure, the financial crisis has eased recently (the recent agreements with Greece have helped too).

With a Greek deal in place, and Germany's Merkel motivated by the election later this year to keep the eurozone together, and a strong commitment by other policymakers to the euro, I think there is a good chance that the eurozone and the euro will make it through 2013 intact.

Even though I've been pessimistic on Europe (In 2011, I argued that the eurozone was heading into recession), I was less pessimistic than many others. Each of the last two years, I argued the eurozone would stay together (2011: Europe and the Euro and 2012: Europe and the Euro). My guess is the eurozone makes it through another year without losing any countries or a serious collapse.  Obviously several countries are near the edge, and the key will be to return to expansion soon.

Note: unless the eurozone "implodes", I don't think Europe poses a large downside risk to the US.  If there is a breakup of the euro (something I do not expect in 2013), then the impact on the US could be significant due to financial tightening.