From the Dallas Fed: Texas Manufacturing Activity Strengthens in January


Texas factory activity rose sharply in January, according to business executives responding to the Texas Manufacturing Outlook Survey. The production index, a key measure of state manufacturing conditions, rose from 3.5 to 12.9, which is consistent with faster growth.

Perceptions of broader business conditions were more positive in January. The general business activity index increased from 2.5 to 5.5, its best reading since March. The company outlook index also rose sharply to 12.6, largely due to a drop in the share of firms reporting a worsened outlook from 10 percent in December to 6 percent in January.

This was the strongest regional manufacturing report for January and above expectations of a reading of 4.0 for the general business activity index. 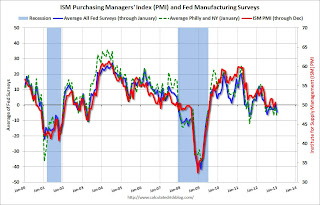 The average of the five regional surveys turned negative again.

The ISM index for January will be released Friday, Feb 1st, and these surveys suggest another weak reading - and probably indicating contraction (below 50). Note: The Markit Flash index was surprisingly strong in January.
Posted by Calculated Risk on 1/28/2013 11:38:00 AM
Newer Post Older Post Home