CoreLogic: House Prices up 6.3% Year-over-year in October, Largest increase since 2006

Notes: This CoreLogic House Price Index report is for October. The recent Case-Shiller index release was for September. Case-Shiller is currently the most followed house price index, however CoreLogic is used by the Federal Reserve and is followed by many analysts. The CoreLogic HPI is a three month weighted average and is not seasonally adjusted (NSA).

The CoreLogic Pending HPI indicates that November 2012 home prices, including distressed sales, are expected to rise by 7.1 percent on a year-over-year basis from November 2011 and fall by 0.3 percent on a month-over-month basis from October 2012 as sales exhibit a seasonal slowdown going into the winter.
...
“The housing recovery that started earlier in 2012 continues to gain momentum," said Mark Fleming, chief economist for CoreLogic. “The recovery is geographically broad-based with almost all markets experiencing some appreciation. Sand and energy states continue to experience the most robust appreciation and some judicial foreclosure states are even recording increasing prices.” 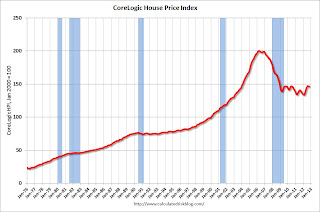 The index is off 27% from the peak - and is up 9.6% from the post-bubble low set in February (the index is NSA, so some of the increase is seasonal). 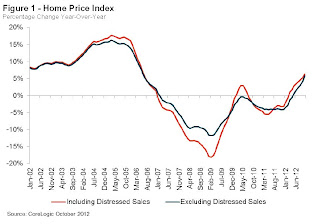 The second graph is from CoreLogic. The year-over-year comparison has been positive for eight consecutive months suggesting house prices bottomed earlier this year on a national basis (the bump in 2010 was related to the tax credit).

This is the largest year-over-year increase since 2006.