From S&P: Sustained Recovery in Home Prices According to the S&P/Case-Shiller Home Price Indices


Data through October 2012, released today by S&P Dow Jones Indices for its S&P/Case-Shiller1 Home Price Indices, ... showed home prices rose 4.3% in the 12 months ending in October in the 20-City Composite, out-distancing analysts’ forecasts. Anticipated seasonal weakness appeared as twelve of the 20 cities and both Composites posted monthly declines in home prices in October.

The 10- and 20-City Composites recorded respective annual returns of +3.4% and +4.3% in October 2012 – larger than the +2.1% and +3.0% annual rates posted for September 2012. In nineteen of the 20 cities, annual returns in October were higher than September. Chicago and New York were the only two cities with negative annual returns in October. Phoenix home prices rose for the 13th month in a row. San Diego was second best with nine consecutive monthly gains.
...
“Annual rates of change in home prices are a better indicator of the performance of the housing market than the month-over-month changes because home prices tend to be lower in fall and winter than in spring and summer. Both the 10- and 20-City Composites and 19 of 20 cities recorded higher annual returns in October 2012 than in September. The impact of the seasons can also be seen in the seasonally adjusted data where only three cities declined month-to-month. The 10-City Composite annual rate of +3.4% in October was lower than the 20-City Composite annual figure of +4.3% because the two weaker cities – Chicago and New York – have higher weights in the 10-City Composite." [says David M. Blitzer, Chairman of the Index Committee at S&P Dow Jones Indices.]

“Looking over this report, and considering other data on housing starts and sales, it is clear that the housing recovery is gathering strength. Higher year-over-year price gains plus strong performances in the southwest and California, regions that suffered during the housing bust, confirm that housing is now contributing to theeconomy.' 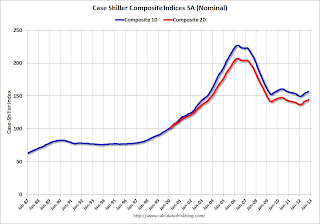 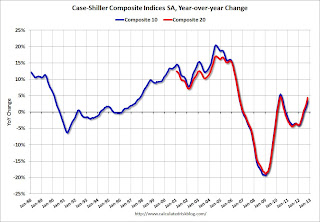 The Composite 20 SA is up 4.3% compared to October 2011. This was the fifth consecutive month with a year-over-year gain since 2010 (when the tax credit boosted prices temporarily). 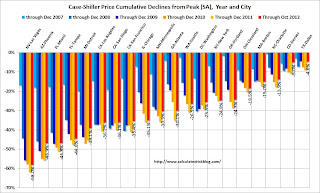 Prices increased (SA) in 17 of the 20 Case-Shiller cities in October seasonally adjusted (also 12 of 20 cities increased NSA). Prices in Las Vegas are off 58.0% from the peak, and prices in Dallas only off 4.6% from the peak. Note that the red column (cumulative decline through October 2012) is above previous declines for all cities.