One of the most frequent questions I receive via email is: "Is another recession starting?"  There are quite a few people who have been calling a recession recently (ECRI has called several recessions since August 2011 or so).  They still have time on their most recent calls, but their earlier calls were wrong.

Part of the problem in forecasting right now is the sluggish recovery has ups and downs, and each down looks like the start of a recession to some models. Another problem is that negative news sells ... and there is an entire industry that sells doom and gloom.  And that industry has expanded significantly in recent years ...

There is a recession probability chart from the St Louis Fed making the rounds today. The chart shows that the odds of a recession have increased recently (ht Bruce). 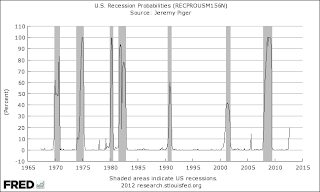 Here is the chart from FRED at the St Louis Fed: "This recession probabilities series from University of Oregon economist Jeremy Piger is a monthly measure of the probability of recession in the United States obtained from a dynamic-factor Markov-switching model applied to 4 monthly coincident variables: non-farm payroll employment, the index of industrial production, real personal income excluding transfer payments, and real manufacturing and trade sales."

However there are reasons this shouldn't be interpreted as indicating a new recession. Jeff Miller at a Dash of Insight does the heavy lifting: Debunking the 100% Recession Chart. Jeff actually read the underlying papers - and contacted the authors. Please read his post for more.

My view is the economy is not currently in a recession, and that economic growth will pickup in 2013, although there are downside risks from Europe and the potential for a policy mistake in the US (no agreement on the fiscal bluff). As I've noted before, I see two key reason for a pickup in the US: 1) I expect residential investment to increase next year (the key leading indicator for the economy), 2) I think the drag from state and local governments will subside.

Of course I could be wrong, but currently I'm not even on recession watch!