Last week was a short holiday week and I hope everyone is enjoying their Thanksgiving weekend!

Overall the economic data was positive last week, especially the housing data.  Housing starts were at the highest level in four years, but are still very low - and both comments are important.  Housing (residential investment) is now a tail wind for the economy, and housing can increase significantly from here.

Initial weekly unemployment claims were still elevated because of Hurricane Sandy, but I expect claims will decline back to the pre-storm level pretty quickly.

Early in the week I spoke with Joe Weisenthal at Business Insider, and he wrote a way too nice article: The Genius Who Invented Economics Blogging Reveals How He Got Everything Right And What's Coming Next.

As I noted, I just track economic data and make a few forecasts - and I didn't invent economic blogging (although I've been at it for eight years). Professor Krugman added a few nice comments: All Hail Calculated Risk.

Excuse my blushing - thanks to all for reading! 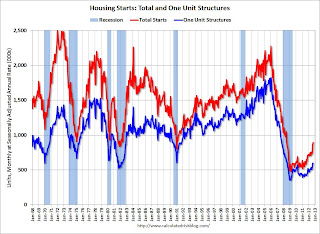 This was above expectations of 840 thousand starts in October. This was mostly because of the volatile multi-family sector that increased sharply in October, however single family starts have increased recently too.   Starts are still very low, but on pace to be up about 25% from 2011.

All Housing Investment and Construction Graphs 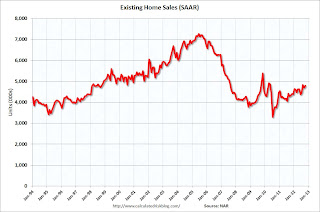 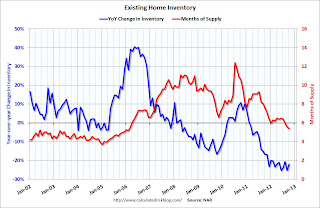 Inventory decreased 21.9% year-over-year in October from October 2011. This is the 20th consecutive month with a YoY decrease in inventory.

Months of supply declined to 5.4 months in October.

This was slightly above expectations of sales of 4.74 million. For existing home sales, the key number is inventory - and the sharp year-over-year decline in inventory is a positive for housing. 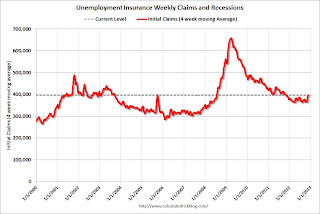 The dashed line on the graph is the current 4-week average. The four-week average of weekly unemployment claims increased to 396,250.

This sharp increase in the 4 week average is due to Hurricane Sandy as claims increased significantly in the impacted areas. Note the spike in 2005 related to hurricane Katrina - we are seeing a similar impact, although on a smaller scale.

Weekly claims were about at the consensus forecast. 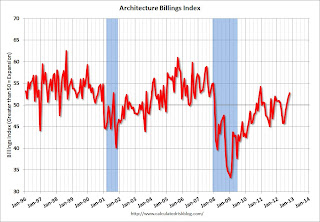 This graph shows the Architecture Billings Index since 1996. The index was at 52.8 in October, up from 51.6 in September. Anything above 50 indicates expansion in demand for architects' services.

This increase is mostly being driven by demand for design of multi-family residential buildings - and this suggests there are more apartments coming (there are already quite a few apartments under construction). New project inquiries are also increasing. Note: This includes commercial and industrial facilities like hotels and office buildings, multi-family residential, as well as schools, hospitals and other institutions.

According to the AIA, there is an "approximate nine to twelve month lag time between architecture billings and construction spending" on non-residential construction. This suggests some increase in CRE investment next year (it will be some time before investment in offices and malls increases significantly). 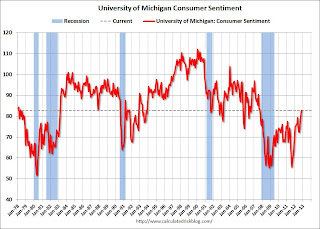 The final Reuters / University of Michigan consumer sentiment index for November declined to 82.7 from the preliminary reading of 84.9, and was up from the October reading of 82.6.