From the National Restaurant Association: Restaurant Performance Index Fell to its Lowest Level in 14 Months as Operator Optimism Plunged


The RPI – a monthly composite index that tracks the health of and outlook for the U.S. restaurant industry – stood at 99.5 in October, down 0.9 percent from September. In addition, October represented the first time in 14 months that the RPI fell below 100, which signifies contraction in the index of key industry indicators.

“Although restaurant operators overall continued to report positive same-store sales in October, their short-term outlook for sales growth and the economy is decidedly more pessimistic,” said Hudson Riehle, senior vice president of the Research and Knowledge Group for the Association. “Nearly two out of five restaurant operators expect business conditions to worsen in the next six months, which is double the proportion that expect conditions to improve.”

The Current Situation Index, which measures current trends in four industry indicators (same-store sales, traffic, labor and capital expenditures), stood at 99.3 in October – down 0.6 percent from a level of 99.9 in September. While same-store sales remained positive in October, declines in the labor and customer traffic indicators outweighed the performance, which resulted in a Current Situation Index reading below 100 for the third time in the last four months. 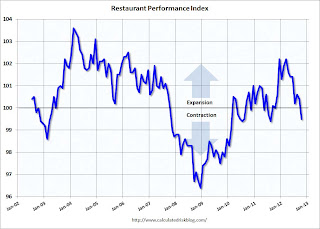 Restaurant spending is discretionary, so even though this is "D-list" data, I like to check it every month.
Posted by Calculated Risk on 11/30/2012 12:08:00 PM
Newer Post Older Post Home