This was another encouraging employment report. The 171,000 payroll jobs added in October, plus the 84,000 in upward revisions to the August and September reports, suggests decent job growth recently.

Some of this reported increase might be related to distorted seasonal factors (distorted by the severe recession). This was the third year in a row with weaker payroll growth in the summer, and it might be helpful to look at the year-over-year growth (year-over-year, payroll has increased close to 2 million jobs).

In a recent post, I highlighted Two Reasons to expect Economic Growth to Increase. The first reason was that we are nearing the end of the state and local government layoffs.  Recent reports suggests we may be near the bottom (last graph).

The second reason was a pickup in residential investment. This report showed an increase of 17 thousand construction jobs, however I think the BLS is under counting construction jobs at the turn. The preliminary benchmark revision showed an upward revision of 386,000 payroll jobs as of March (this is an annual revision bench marked to state tax records). A fairly large portion of the upward revision was for construction workers (85,000 more jobs added), and I suspect that the BLS statistical model that estimates new company formation (the Birth/Death model) is currently underestimating the formation of small construction companies.

Overall this employment report was an improvement over recent reports, especially with the upward revisions. Here are a few more graphs... 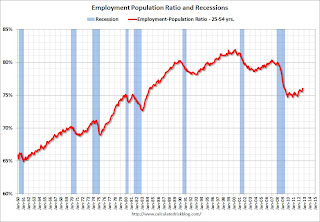 Since the participation rate has declined recently due to cyclical (recession) and demographic (aging population) reasons, an important graph is the employment-population ratio for the key working age group: 25 to 54 years old.

This ratio should probably move close to 80% as the economy recovers. The ratio was unchanged in October at 76.0%, the highest level since early 2009 - but there is still a long ways to go. 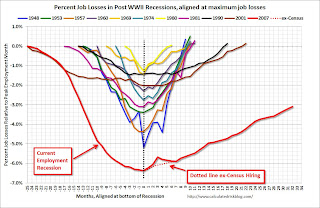 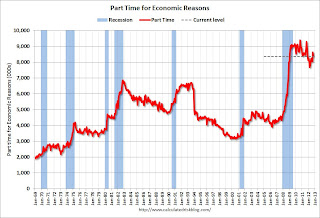 
The number of persons employed part time for economic reasons (sometimes referred to as involuntary part-time workers) fell by 269,000 to 8.3 million in October, partially offsetting an increase of 582,000 in September. These individuals were working part time because their hours had been cut back or because they were unable to find a full-time job.

The number of part time workers declined in October to 8.34 millon from 8.61 million in September.

These workers are included in the alternate measure of labor underutilization (U-6) that declined to 14.6% in October. 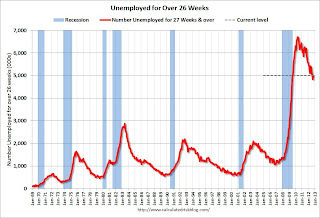 According to the BLS, there are 5.00 million workers who have been unemployed for more than 26 weeks and still want a job. This was up from 4.84 million in September. This is generally trending down, but is still very high. Long term unemployment remains one of the key labor problems in the US. 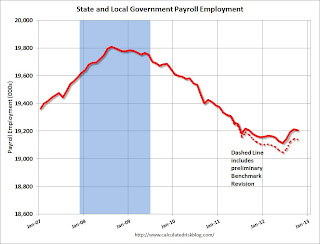 Note: The dashed line shows an estimate including the benchmark revision.

Overall this was a somewhat encouraging report.