I first started tracking monthly vehicle miles to see the impact of the recession on driving. Since then we've seen the impact of demographics and changing preferences ... very interesting. 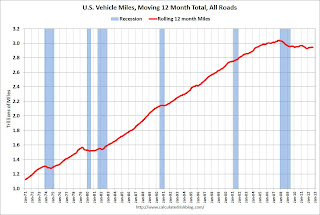 Currently miles driven has been below the previous peak for 58 months - and still counting. 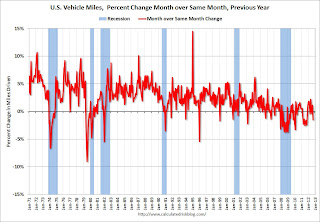 Just looking at gasoline prices suggest miles driven will be down again in October - especially with the very high prices in California. Nationally gasoline prices averaged $3.81 in October, up sharply from $3.51 a year ago.

However, as I've mentioned before, gasoline prices are just part of the story. The lack of growth in miles driven over the last 5 years is probably also due to the lingering effects of the great recession (high unemployment rate and lack of wage growth), the aging of the overall population (over 55 drivers drive fewer miles) and changing driving habits of young drivers. 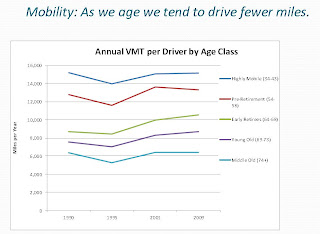 Also miles driven has been falling for lower age groups over the last few years, and the next survey will probably show that decline. Here is an article on younger drivers: Young People Are Driving Less—And Not Just Because They're Broke (ht KarmaPolice)


An April study by the U.S. Public Interest Research Group found that between 2001 and 2009 the average annual vehicle miles traveled by Americans ages 16 to 34 fell by close to a quarter, from 10,300 to 7,900 per capita (four times greater than the drop among all adults), and from 12,800 to 10,700 among those with jobs.
...
The PIRG researchers concluded that this change couldn’t simply be pegged to the economy, but indicates a value shift.