This is a minor indicator that I follow. Clearly truck tonnage was impacted by Hurricane Sandy in October, and we will probably see a bounce back in November and December.


The American Trucking Associations’ advanced seasonally adjusted (SA) For-Hire Truck Tonnage Index decreased 3.8% in October after falling 0.4% in September. (The 0.4% decrease in September was revised from a 0.1% gain ATA reported on October 23, 2012.) October’s drop was the third consecutive totaling 4.7%. As a result, the SA index equaled 113.7 (2000=100) in October, the lowest level since May 2011. Compared with October 2011, the SA index was off 2.1%, the first year-over-year decrease since November 2009. Year-to-date, compared with the same period last year, tonnage was up 2.9%.
...
“Clearly Hurricane Sandy negatively impacted October’s tonnage reading,” ATA Chief Economist Bob Costello said. “However, it is impossible for us to determine the exact impact.”

Costello noted that a large drop in fuel shipments into the affected area likely put downward pressure on October’s tonnage level since fuel is heavy freight, in addition to reductions in other freight.

“I’d expect some positive impact on truck tonnage as the rebuilding starts in the areas impacted by Sandy, although that boost may only be modest in November and December,” he said. “Excluding the Hurricane impacts, I still think truck tonnage is decelerating along with factory output and consumer spending on tangible-goods.”
emphasis added


Trucking serves as a barometer of the U.S. economy, representing 67% of tonnage carried by all modes of domestic freight transportation, including manufactured and retail goods. Trucks hauled 9.2 billion tons of freight in 2011. Motor carriers collected $603.9 billion, or 80.9% of total revenue earned by all transport modes. 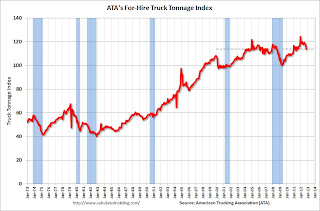 Even with the sharp decline in October, the index is at the pre-recession level. However, even before the hurricane, the index was mostly moving sideways this year due to the slowdown in manufacturing.
Posted by Calculated Risk on 11/23/2012 04:09:00 PM
Newer Post Older Post Home