Notes: This CoreLogic House Price Index report is for August. The Case-Shiller index released last week was for July. Case-Shiller is currently the most followed house price index, however CoreLogic is used by the Federal Reserve and is followed by many analysts. The CoreLogic HPI is a three month weighted average and is not seasonally adjusted (NSA).


Home prices nationwide, including distressed sales, increased on a year-over-year basis by 4.6 percent in August 2012 compared to August 2011. This change represents the biggest year-over-year increase since July 2006. On a month-over-month basis, including distressed sales, home prices increased by 0.3 percent in August 2012 compared to July 2012. The August 2012 figures mark the sixth consecutive increase in home prices nationally on both a year-over-year and month-over-month basis. The HPI analysis from CoreLogic shows that all but six states are experiencing price gains.

“Again this month prices rose on a year-over-year basis and our expectation is for that to continue in September based on our pending HPI forecast,” said Mark Fleming, chief economist for CoreLogic. “The housing markets gains are increasingly geographically diverse with only six states continuing to show declining prices.” 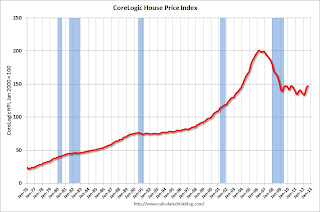 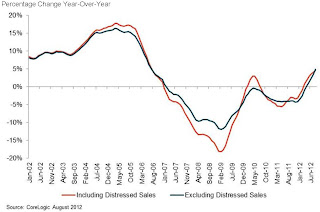 The second graph is from CoreLogic. The year-over-year comparison has been positive for six consecutive months suggesting house prices bottomed earlier this year on a national basis.

On a month-to-month basis, this index will probably turn negative in September (normal seasonal decline); the key will be the year-over-year change.
Posted by Calculated Risk on 10/02/2012 09:58:00 AM
Newer Post Older Post Home