This gives a total of 11.12% delinquent or in foreclosure. It breaks down as:

This following graph shows the total delinquent and in-foreclosure rates since 1995. 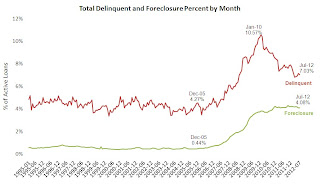 The in-foreclosure rate was at 4.08%. There are still a large number of loans in this category (about 1.96 million). 
“Nationally, 18 percent of borrowers who are current on their loan payments are ‘underwater’ (owing more on the mortgage than the home’s current market value), ranging from a low of 0.4 percent in Wyoming to nearly 55 percent in Nevada. As negative equity increases, we see corresponding increases in the number of new problem loans. In Nevada and Florida, two of the states with the highest percentage of underwater borrowers, more than three percent of borrowers who were up to date on their payments are 60 or more days delinquent six months later. This suggests that further home price declines – should they occur – could jeopardize recent improvements.”