• From Zillow: Negative Equity Falls in Second Quarter; Nearly Half of Borrowers Under 40 Remain Underwater

The total amount of negative equity in the country declined by $42 billion in the second quarter to $1.15 trillion.

That is a decline of about 400,000 borrowers (I expect a larger decline when CoreLogic reports). Zillow chief economist Stan Humphries has more: Negative Equity Declines Slightly on the Back of Modest Home Value Gains


While roughly one out of every three homeowners with mortgages is underwater, 91 percent of these homeowners are current on their mortgage and continue to make payments. 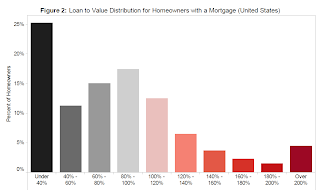 Humphries provided this chart of Zillow's estimate of the Loan-to-Value (LTV) for homeowners with a mortgage. From Humphries:

The biggest concern are those homeowners deep underwater.

“Although some housing markets are still facing significant challenges, house prices were quite strong in most areas in the second quarter,” said FHFA Principal Economist Andrew Leventis. “The strong appreciation may partially reflect fewer homes sold in distress, but declining mortgage rates and a modest supply of homes available for sale likely account for most of the price increase.”

The Case-Shiller index will for June will be released this coming Tuesday.


The preliminary ‘flash’ PMI reading which is based on around 85% of usual monthly replies rose slightly from 51.4 in July to 51.9 ... Employment in the manufacturing sector rose further in August, but the rate of job creation slowed for the fifth month running to the weakest since December 2010.

This was weak, but better than the expected 51.0.