Fannie Mae reported that the Single-Family Serious Delinquency rate declined in July to 3.50% from 3.53% June. The serious delinquency rate is down from 4.08% in July last year, and this is the lowest level since April 2009.

The Fannie Mae serious delinquency rate peaked in February 2010 at 5.59%.

These are loans that are "three monthly payments or more past due or in foreclosure". 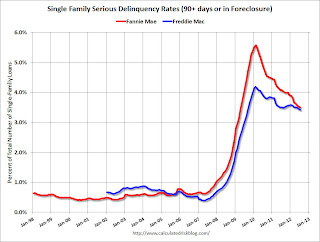 In 2009, Fannie's serious delinquency rate increased faster than Freddie's rate. Since then, Fannie's rate has been falling faster - and now the rates are at about the same level.

Although this indicates some progress, the "normal" serious delinquency rate is under 1% - and it looks like it will be several years until the rates back to normal.