In the previous post, I noted that I think the housing recovery will continue to be sluggish relative to previous housing recoveries. There are several reasons for this.

First, the causes of this downturn were different than in most cycles. Usually housing down cycles are related to the Fed fighting inflation, and then housing comes back strongly when the Fed starts to ease again. But in this cycle, the housing downturn was the result of the bursting of the housing bubble and the financial crisis.

As everyone now knows (or should know by now), recoveries following a financial crisis are sluggish. This is especially true for housing as all the excesses have to be worked down before the recovery will become robust. In some areas of the country, housing is starting to recover, and in other areas there are still a large number of excess vacant houses (although the number is being reduced just about everywhere).

There are also a large number of houses in the foreclosure process, especially in certain states with a judicial foreclosure process (like New Jersey). This means there will be competition for homebuilders from foreclosures for an extended period in these areas.

Contrast this to a typical recovery were most areas recover at the same time. 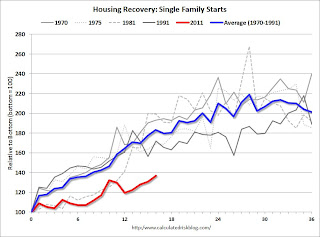 This graph compares the current housing recovery (single family starts) to previous recoveries. The bottom is set to 100 for each housing cycle.

Note: This doesn't even consider the depth of the current cycle (the deepest decline in housing starts since the Census Bureau started collecting data).

The only comparable sluggish recovery (first year) was the one that started in 1981, and that was sluggish because mortgage rates were around 17%. When mortgage rates fell to only 13%, housing took off.