S&P/Case-Shiller released the monthly Home Price Indices for June (a 3 month average of April, May and June).

This release includes prices for 20 individual cities, two composite indices (for 10 cities and 20 cities) and the quarterly national index.

From S&P: Home Prices Rose in the Second Quarter of 2012 According to the S&P/Case-Shiller Home Price Indices 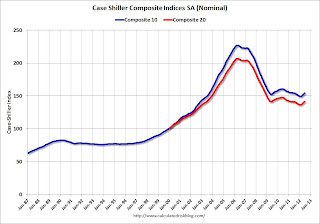 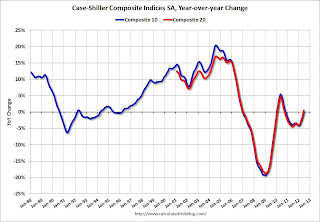 The Composite 20 SA is up 0.5% compared to June 2011. This was the first year-over-year since 2010 (when the tax credit boosted prices temporarily). 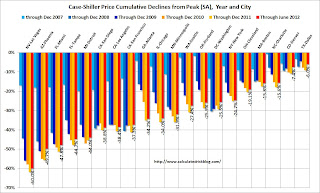 Prices increased (SA) in 18 of the 20 Case-Shiller cities in June seasonally adjusted (all 20 cities increased NSA). Prices in Las Vegas are off 60.0% from the peak, and prices in Dallas only off 6.0% from the peak. Note that the red column (cumulative decline through June 2012) is above previous declines for all cities.

This was better than the consensus forecast and the change to a year-over-year increase is significant. I'll have more on prices later.
Posted by Calculated Risk on 8/28/2012 09:00:00 AM
Newer Post Older Post Home