[Strip mall] The national vacancy rate fell by 10 bps during the second quarter to 10.8%. This is the second consecutive quarterly decline in the vacancy rate after vacancies had generally been rising between the second quarter of 2005 and the fourth quarter of 2011. Although demand for space remains weak, new construction remains moored at such low levels that even weak demand is sufficient to push vacancy rates downward. Only 572,000 SF of neighborhood and community center space were delivered during the quarter. That is the second-lowest quarterly figure on record since Reis began publishing quarterly data in 1999 and a fairly substantial decline from the already scant 1.554 million SF that were delivered during the first quarter.

Despite the second consecutive quarterly vacancy decline, Reis is not yet convinced that a recovery for shopping centers has commenced. Just as much of the recent improvement in the market is owed to limited increases in supply as the somewhat resurgent demand. New completions remain just above historically low levels. With supply growth once again falling back to such trivial levels, the modest demand we observed pushed vacancy down slightly. Two consecutive quarters of vacancy decline is a notable result, but nonetheless only represents the nascent stages of stabilization. With construction projected to remain at low levels, Reis expects vacancies to continue moving slowly downward in 2012 as demand for space outpaces new construction.
...
Regional malls posted another quarter of modest improvement, with national vacancies declining by 10 bps to 8.9%. This is the third consecutive quarter with a vacancy decline. Asking rents grew by 0.3%, marking the fifth consecutive quarter of rent increases. Although regional malls continue to perform better then neighborhood and community centers at this juncture, demand for space remains weak. 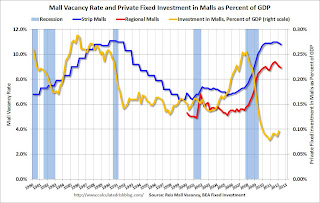 The yellow line shows mall investment as a percent of GDP. This isn't zero because this includes renovations and improvements. New mall investment has essentially stopped following the financial crisis.