Real gross domestic product -- the output of goods and services produced by labor and property located in the United States -- increased at an annual rate of 1.5 percent in the second quarter of 2012, (that is, from the first quarter to the second quarter), according to the "advance" estimate released by the Bureau of Economic Analysis. In the first quarter, real GDP increased 2.0 percent. [revised up from 1.9 percent]

Overall the revisions to the last three years were pretty minor. 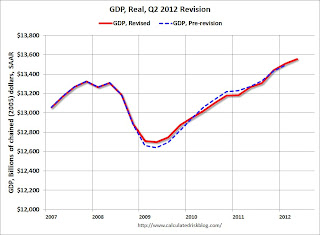 Real GDP in Q1 was slightly above the previously reported level indicating the output gap is about the same as previously estimated. 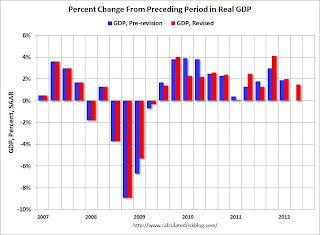 The second graph shows the same data but as a percent change annualized.