The American Trucking Associations’ advanced seasonally adjusted (SA) For-Hire Truck Tonnage Index increased 1.2% in June after falling 1.0% in May. (May’s loss was larger than the 0.7% drop ATA reported on June 19.) June’s increase was the largest month-to-month gain in 2012. However, the index contracted a total of 2.1% in April and May. The latest gain increased the SA index to 119.0 (2000=100), up from May’s level of 117.5. Compared with June 2011, the SA index was 3.2% higher, the smallest year-over-year increase since March 2012. Year-to-date, compared with the same period last year, tonnage was up 3.7%.
...
“June’s increase was a pleasant surprise, but the lower year-over-year gain fits with an economy that has slowed,” ATA Chief Economist Bob Costello said. “Manufacturing output was strong in June, which helped tonnage levels.” ... Costello lowered his tonnage outlook for 2012 to the 3% to 3.5% range due to recent economic weakness. 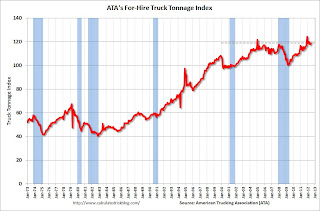 The dashed line is the current level of the index. The index is above the pre-recession level and still up 3.7% year-over-year - but has been moving mostly sideways in 2012.


Trucking serves as a barometer of the U.S. economy, representing 67% of tonnage carried by all modes of domestic freight transportation, including manufactured and retail goods. Trucks hauled 9.2 billion tons of freight in 2011. Motor carriers collected $603.9 billion, or 80.9% of total revenue earned by all transport modes.