This release includes prices for 20 individual cities, two composite indices (for 10 cities and 20 cities) and the National index.

From S&P: Pace of Decline in Home Prices Moderates as the First Quarter of 2012 Ends, According to the S&P/Case-Shiller Home Price Indices

Data through March 2012, released today by S&P Indices for its S&P/CaseShiller Home Price Indices ... showed that all three headline composites ended the first quarter of 2012 at new post-crisis lows. The national composite fell by 2.0% in the first quarter of 2012 and was down 1.9% versus the first quarter of 2011. The 10- and 20-City Composites posted respective annual returns of -2.8% and -2.6% in March 2012. Month-over-month, their changes were minimal; average home prices in the 10-City Composite fell by 0.1% compared to February and the 20-City remained basically unchanged in March over February. However, with these latest data, all three composites still posted their lowest levels since the housing crisis began in mid-2006.
...
“While there has been improvement in some regions, housing prices have not turned,” says David M. Blitzer, Chairman of the Index Committee at S&P Indices. “This month’s report saw all three composites and five cities hit new lows. However, with last month’s report nine cities hit new lows. Further, about half as many cities, seven, experienced falling prices this month compared to 16 last time." 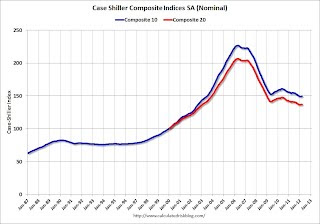 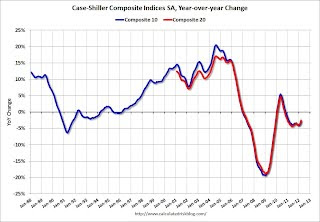 The Composite 20 SA is down 2.6% compared to March 2011. This was a smaller year-over-year decline for both indexes than in February. 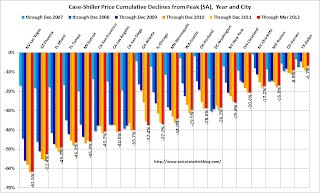