Schedule for Week of April 15th

There are three key housing reports that will be released this week: April homebuilder confidence on Monday, March housing starts on Tuesday, and March existing home sales on Thursday.

Another key report is March retail sales. For manufacturing, the April NY Fed (Empire state) and Philly Fed surveys, and the March Industrial Production and Capacity Utilization report will be released this week.

The AIA's Architecture Billings Index for March will also be released on Wednesday.

All week: 2012 Spring Meetings of the International Monetary Fund and the World Bank Group in Washington, D.C. 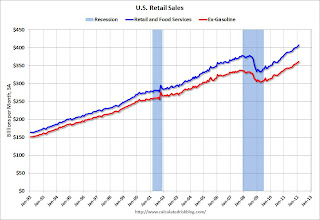 This graph shows retail sales since 1992. This is monthly retail sales and food service, seasonally adjusted (total and ex-gasoline). Retail sales are up 22.6% from the bottom, and now 7.8% above the pre-recession peak (not inflation adjusted).

8:30 AM ET: NY Fed Empire Manufacturing Survey for April. The consensus is for a reading of 18.0, down from 20.2 in March (above zero is expansion).

10:00 AM: Manufacturing and Trade: Inventories and Sales for February (Business inventories). The consensus is for 0.6% increase in inventories.

10:00 AM: The April NAHB homebuilder survey. The consensus is for a reading of 29, up slightly from 28 in March. Although this index has been increasing lately, any number below 50 still indicates that more builders view sales conditions as poor than good. 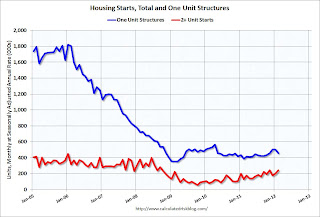 This shows the huge collapse following the housing bubble, and that total housing starts have been increasing a little lately after mostly moving sideways for about two years and a half years. Housing starts might have been boosted by the favorable weather lately. 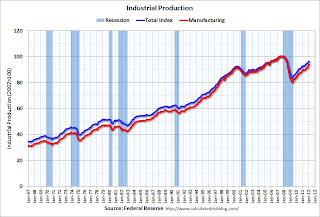 9:15 AM ET: The Fed will release Industrial Production and Capacity Utilization for March.

This shows industrial production since 1967.

The consensus is for a 0.3% increase in Industrial Production in March, and for Capacity Utilization to decrease to 78.6% (from 78.7%).


----- Wednesday, Apr 18th -----
7:00 AM: The Mortgage Bankers Association (MBA) will release the mortgage purchase applications index. This index has been weak this year, although this does not include all the cash buyers.

During the day: The AIA's Architecture Billings Index for March (a leading indicator for commercial real estate). 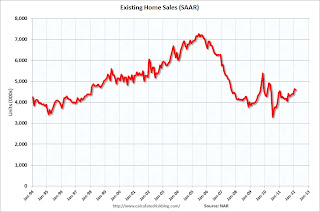 10:00 AM: Existing Home Sales for March from the National Association of Realtors (NAR).

The consensus is for sales of 4.62 million on seasonally adjusted annual rate basis.

A key will be inventory and months-of-supply.

10:00 AM: Conference Board Leading Indicators for March. The consensus is for a 0.2% increase in this index.