From Reuters: US strip-mall vacancy falls 1st time in 7 yrs


The average vacancy rate at U.S. strip malls fell for the first time in nearly seven years in the first quarter and rents inched up, but it is too early to call a rebound for a sector battered by the housing bust and recession, a report by Reis Inc showed.

During the first quarter, the national vacancy rate for strip malls fell to 10.9 percent from 11 percent the prior quarter, according to preliminary figures from Reis. ... "This is really only the first quarter where the vacancy rate declined. We need to see something a little bit more sustained than just a quarter or two before it really signals the beginning of a trend," Severino said.
...
At regional malls, the first-quarter vacancy rate fell to 9 percent from 9.2 percent the prior quarter. It was the second consecutive quarterly decline for the big malls. 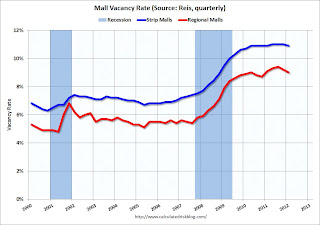 This graph shows the vacancy rate for regional and strip malls since Q1 2000.

It appears the vacancy rate is starting to decline, but very slowly. Just like for office space, there is almost no new supply of malls being built.
Posted by Calculated Risk on 4/06/2012 12:44:00 AM
Newer Post Older Post Home