The causes of the Great Recession were similar to the Great Depression - as opposed to most post war recessions that were caused by Fed tightening to slow inflation - and I'm frequently asked if we could compare the percent job losses during the two periods. Unfortunately there is very little data for the Great Depression.

Back in February I posted a graph based on some rough annual data.

On Friday, Treasury released a slide deck titled Financial Crisis Response In Charts. One of the charts shows the percentage jobs lost in the current recession compared to the Great Depression. 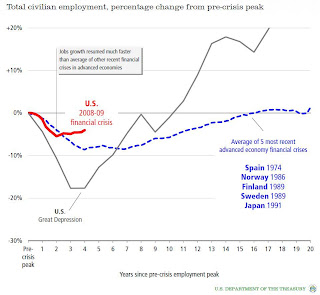 This graph compares the job losses from the start of the employment recession, in percentage terms for the Great Depression, the 2007 recession, and the average for several recent recession following financial crisis.