Here are a few more comments and a long term graph from Reis.


National vacancies continued falling at a very modest pace in the first quarter, mirroring the tepid improvement in the labor market. The sector absorbed 5.998 million SF, the fifth consecutive quarterly gain in occupied stock since the beginning of 2011.

Although net absorption levels remain muted, five consecutive quarters of positive net absorption provide convincing evidence that the sector is indeed recovering. ... Given the rate of improvement that the sector is experiencing, it will be years before it is able to recover the space that was vacated during the recession and early stages of the economic recovery. The national vacancy rate has regressed back to levels unseen since 1993 and remains well above the cyclical low of 12.5% from 2007 before the onset of the recession.
...
National asking and effective rent growth improved slightly in the first quarter, continuing the slow upward trend that began in the first quarter of 2011. Annual gains of 1.6 and 2.1 percent, respectively, also indicate a moderate pace of improvement, but are unimpressive.
...
Weak supply growth remains a tailwind for improvement in the office sector. During the first quarter of 2012 only 1.917 million square feet of office space were completed. This represents the lowest quarterly level on record since Reis began tracking quarterly market data in 1999. ... With little supply being delivered, even the low levels of absorption that we are observing are sufficient enough to generate vacancy rate declines and rent growth. 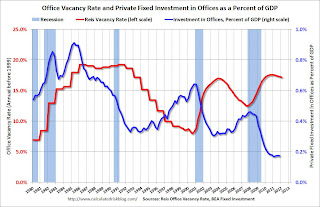 This graph shows the office vacancy rate starting in 1980 (prior to 1999 the data is annual). Back in the early '80s, there was overbuilding in the office sector even as the vacancy rate was rising. This was due to the very loose lending that led to the S&L crisis.

During the housing bubble, office investment started to increase even before the vacancy rate had fallen below 14%. This was due to loose lending - again. Investment essentially stopped following the financial crisis.

The good news is, as Severino noted, there is very little new office construction right now and the vacancy rate will probably continue to decline.